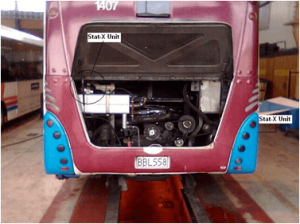 Stat-X fixed fire suppression systems are protecting one thousand (1,000) bus engine compartments with their electrically operated aerosol fire suppression generators. These buses are operating in New Zealand. Each bus is fitted with two 250E with one on either side of the engine to give adequate coverage.

The bus engine management system has been used to control activation of the Stat-X units as well as engine shutdown upon the detection of a fire. Alarmline linear heat detection cable has been used as the detection device and is installed on the roof of the engine compartment.

The fleet did have a fire event and the fire investigator stated, “…the fire protection systems in the engine compartment had operated as designed by containing and extinguishing the fire.”